Lemon Herb Marinade is bright and full of flavor! Fresh lemon juice is mixed together with herbs, olive oil, seasonings and garlic to make the ultimate marinade. Perfect for chicken, pork, seafood, vegetables and so much more!Ingredients Needed for Lemon Herb Marinade...
Read More

This Italian Marinade is loaded full of all the classic flavors to take you straight to Italy. From vibrant herbs of thyme, oregano, and rosemary, to garlic, lemon juice and olive oil, this marinade has it all. Perfect for Italian marinated chicken, steak, seafood or...
Read More

Teriyaki Marinade is loaded full of all the classic flavors that teriyaki should be! From soy sauce, to pineapple juice, to brown sugar, to garlic and additional seasonings, this marinade is purely delicious! Marinate chicken, steak or pork, or toss it in to create a...
Read More

Fajita Marinade is perfect for chicken fajitas, steak fajitas, shrimp fajitas and so much more! Pineapple juice, oil, chili powder, cumin, garlic and lime juice bring this marinade to life. Whip up a batch for a flavorful meal!Ingredients for Fajita Marinade Not only...
Read More

Recipes you need for a fun and delicious Cinco de Mayo all in one place! From fruity drinks, to cheesy appetizers, to drool-worthy main dishes, I've got a roundup of recipes to create the perfect menu!Cinco de Mayo Drink Recipes Strawberry Smash Peach Margaritas...
Read More

Welcome to another Monthly Scoop Post - April 2021 edition! This past month has been a busy one, but a good one! Let's dive into the latest scoop of what's been going on around here in the KJ & Company world, the farm and other life goodies!April Happenings  Whew!...
Read More

Italian Marinated Flank Steak is a recipe loaded full of flavor! A homemade Italian marinade of herbs, garlic, lemon juice and olive oil season the flank steak to perfection. It is just begging to be grilled or seared! Each bite is flavorful and takes flank steak to...
Read More

Strawberry Palomas are a fun, bright cocktail! Each glass is full of muddled strawberries, vibrant grapefruit juice, tequila and lemon-lime soda for the ultimate drink. Sit back, relax and sip down these delicious Palomas!What is the Difference Between a Paloma and a...
Read More

Peas and Pancetta are the perfect combination. Fresh, sweet peas are sautéd together with crispy, salty pancetta and white wine for a scrumptious side dish. No more mushy peas around here! Transform a simple vegetable into a decadently delicious side dish with this...
Read More

Cinnamon French Toast Sticks are a fun, dunk-able spin on a breakfast favorite! Buttery brioche bread is sliced into sticks, coated in a cinnamon-infused custard and cooked to golden brown perfection. Then, rolled into a cinnamon-sugar coating for a sweet, crunchy...
Read More

Spring Chicken Pot Pie is a comforting chicken recipe that is brightened up just in time for Spring. Sautéd chicken is simmered together in a creamy sauce of white wine, lemon juice and herbs. Green peas, sweet corn and carrots add the perfect touch of flavor and...
Read More 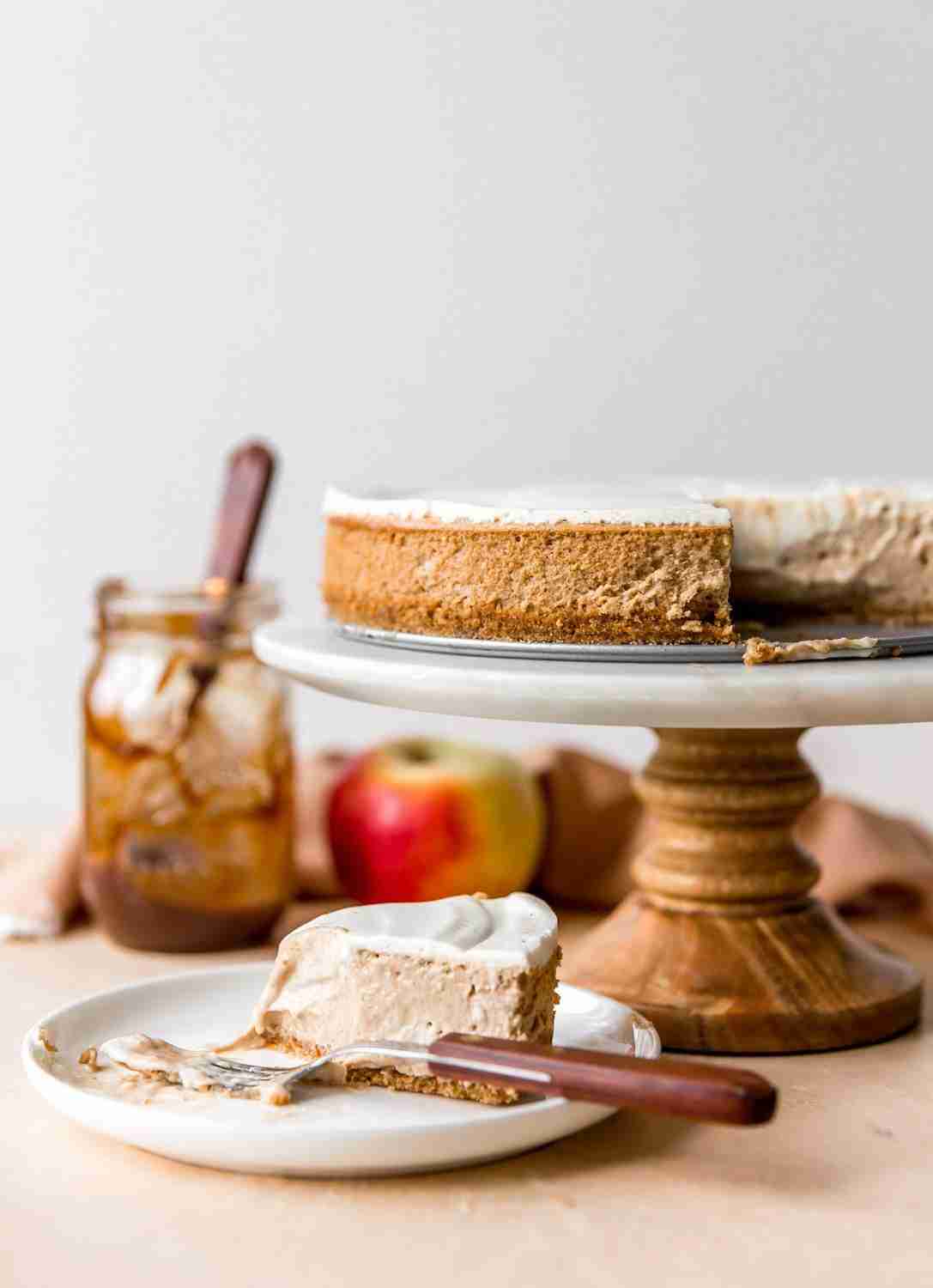 Believe it or not, this Apple Butter Cheesecake has been floating aroun on my to-do recipe list since last year. And boy, am I sure glad I finally made it! One of my favorite things that I love the most about this cheesecake is that it isn’t too overpowering. Just the right amount of warm apple flavor and cinnamon. Every bite took me straight to the holidays! Although, this cheesecake would be good for any occassion. 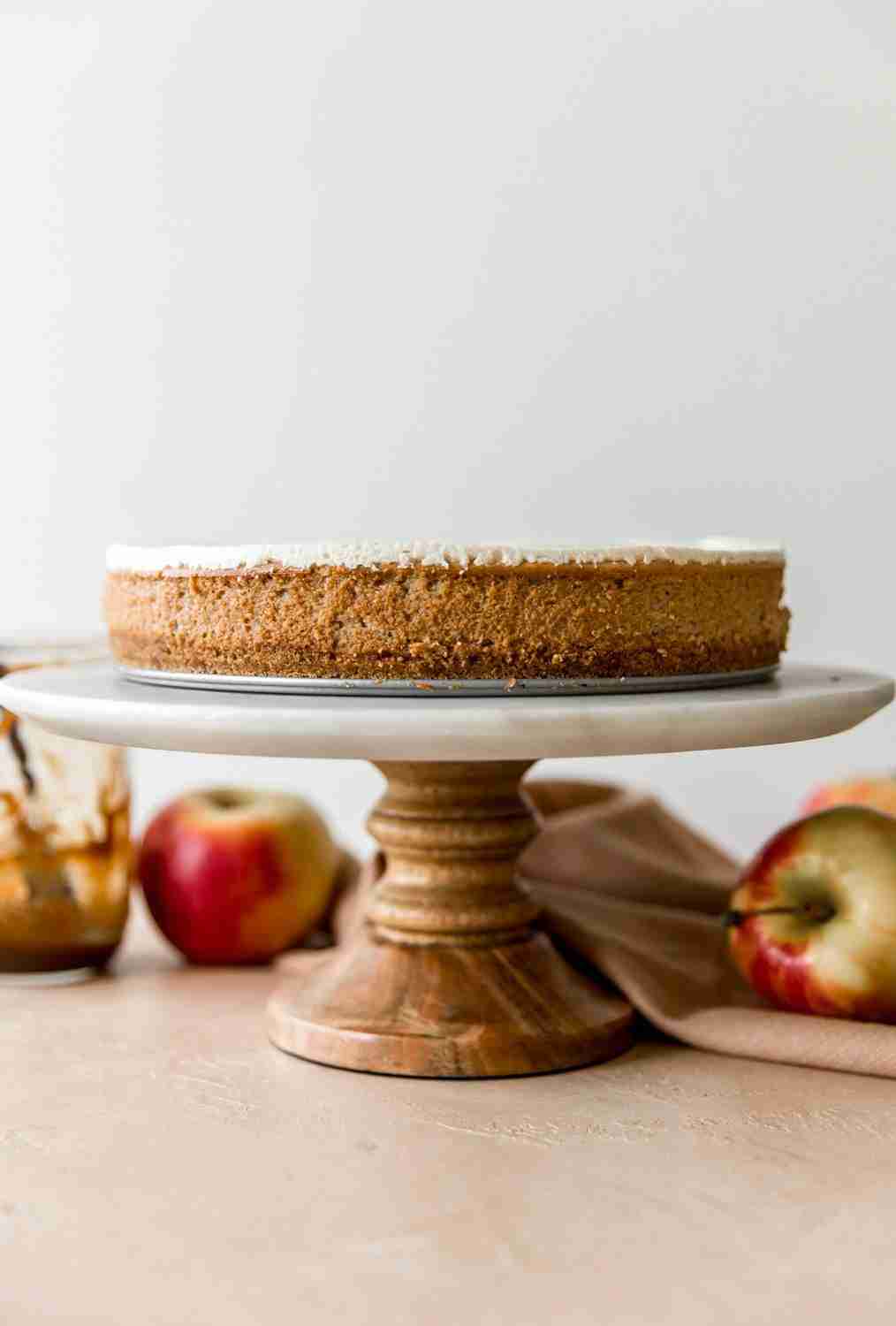 Starting with a classic, buttery graham cracker crust, this cheesecake then has an apple butter cheesecake filling and then is topped with a cinnamon sour cream. Now, you may be going “whaaat?” on the cinnamon sour cream part, but, trust me, it’s worth it! It adds just the right amount of tang and helps accent the natural flavor of the cheesecake.

Let’s talk apple butter. I like to snag mine from my local apple orchard, but there are many other stores that sell it as well! You can even go the home-made route and make your own. All the recipes I see for it look devine! I bet it would make your house smell heavenly as it’s cooking away. If you have a lot of apple butter on hand to use up after this recipe, my Spiced Apple Butter Bread recipe is for you! 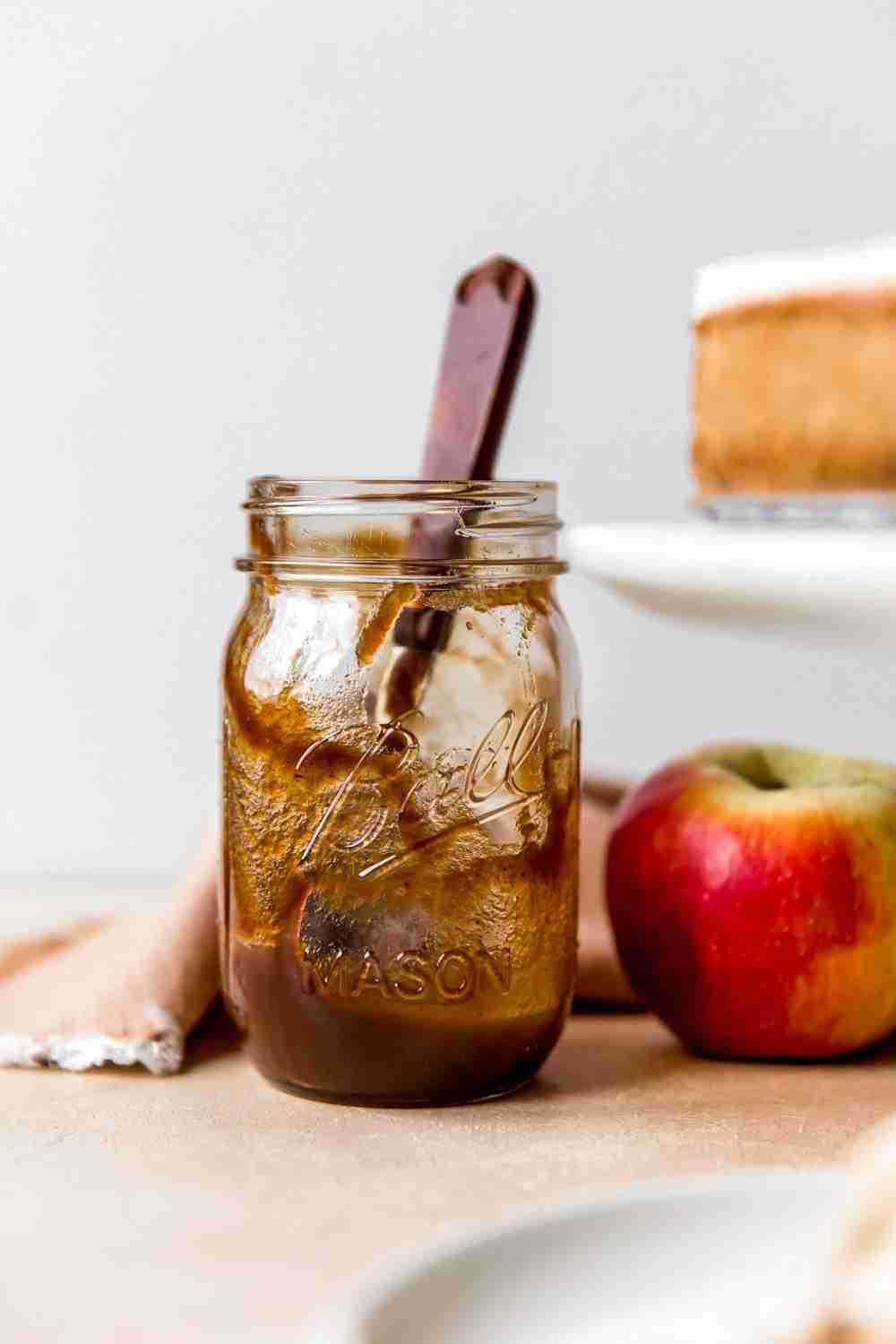 This cheesecake would make the perfect dessert to feed a crowd, which makes it great for holidays or family gatherings! Just make sure you give yourself plenty of time to allow it to set in the refrigerator. 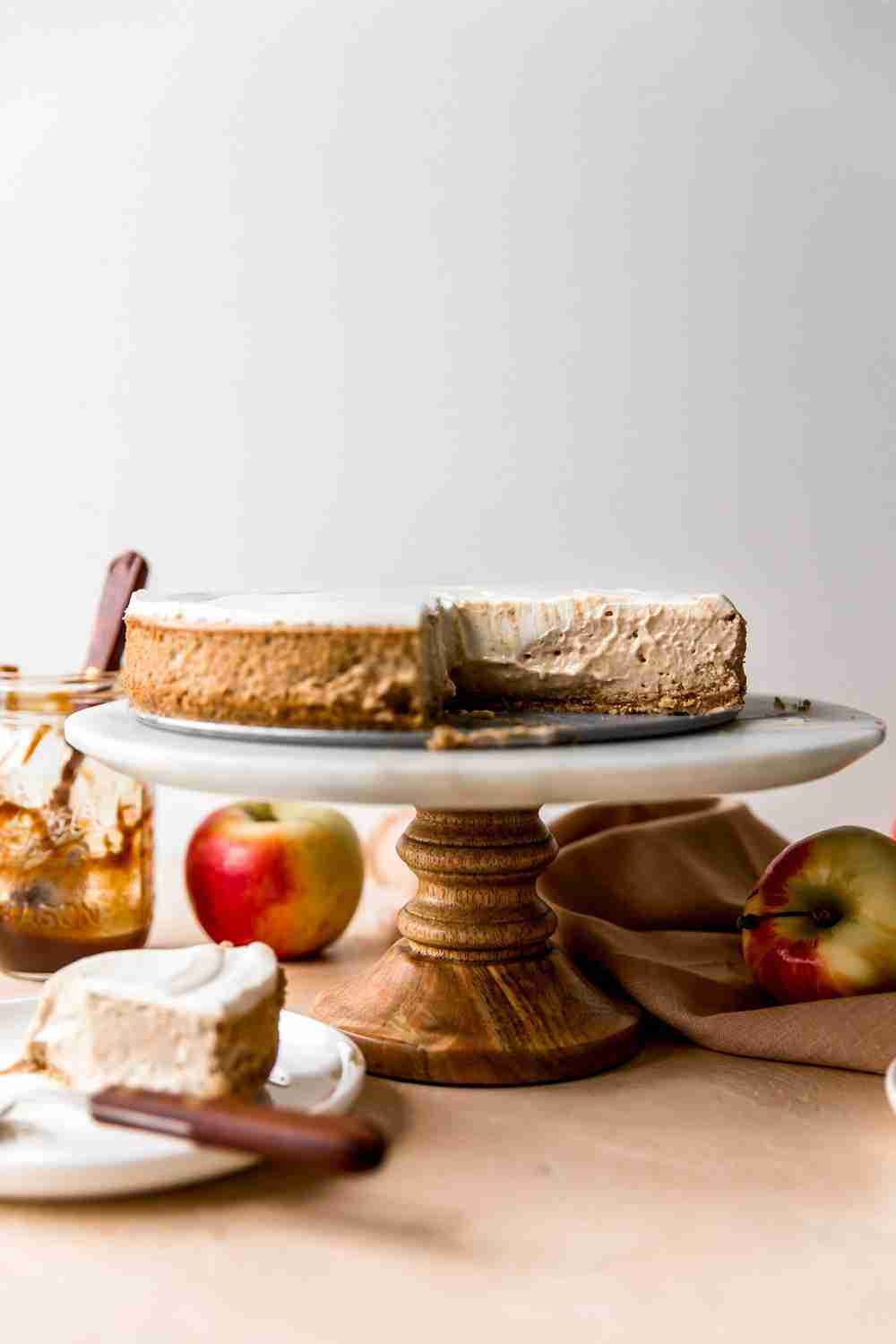 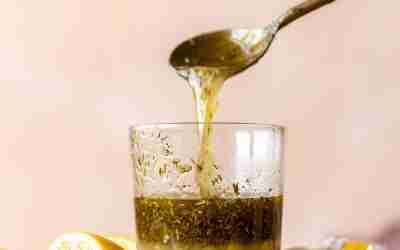 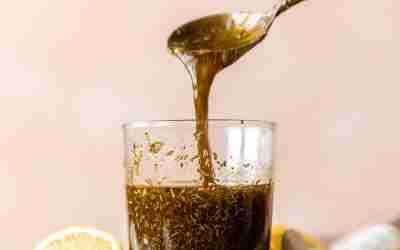 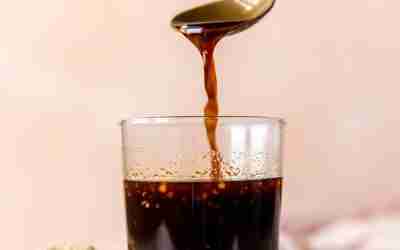